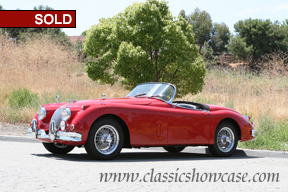 (SOLD) This example, manufactured 20th October 1958, has been properly restored to show driver level in brilliant red with black leather upholstery and black carpets. In addition to the sparkling chrome wire wheels it has a pair of driving lights. The engine's aluminum cam covers, intake manifold, front cover and carburetors have been show-polished to complement its performance. Its history is authenticated by the accompanying Jaguar-Daimler Heritage Certificate. A beautiful example, its next owner will be proud of its appearance and thrilled with its performance.

First introduced in 1948, the Jaguar XKs caused a sensation; race car performance on the road, and with an unsurpassed level of sophistication and timeless beauty. During the XK 150 model run (May 1957 through March 1961), a significant engine modification became available, the S engine which featured changes in the head and intake manifold design. Additional changes in the design and structure of the bearings, clutch and flywheel were made in anticipation of the additional torque and wear. The identification-plate engine serial number defined the engine as delivered from the factory. Externally, the S-type models can be identified by an S placed on the passenger door beneath the quarter-window. The XK150S roadster is highly appreciated by collectors who value its combination of luxury and performance with classic XK Jaguar style.