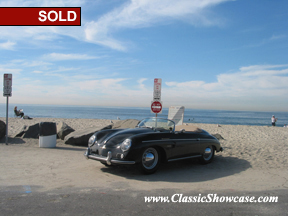 (SOLD) The Porsche 356 ‘Pre A’ is definitively known as the original 356. Production of the 356 began in 1950 and relied heavily on Volkswagen components. The 356 had an integral body and chassis utilizing unitary construction. By 1955 the 356 had been developed into one of the worlds most respected sports cars. This feat was quite remarkable considering that Porsche had yet to celebrate its 10th anniversary. The 356 ‘Pre A’s production ended in 1955 to make way for the 356A.

This car is one of only 5000 ever made from 1954-1958. This is a California car with matching numbers.The car recently underwent a complete service and repaint by Classic Showcase including carb and brake work, transmission and stearingbox rebuilt and calibrated, new tires. The car has been converted into a 12 volt system and has been fitted with Zenith carburetors for driveability. The engine runs very strong. The car is fitted with leather interior, German carpet, and convertible top with side windows. It has a full taneau cover which can be configured to cover just the passenger side. The car also has the original Certificate of Authenticty. This is very rare and collectable.