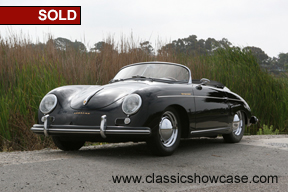 (SOLD) The Speedster offered here received 3000 miles of sorting following a cost-no-object rotisserie restoration of a rust-free Texas original. Of the small umber of Pre-A Speedsters produced, fewer than 100 are believed to exist today. A complete photographic record of the restoration work as well as hundreds of receipts for parts and labor are included with the car. Stock 1955 Speedsters came in 55 and 70 horsepower versions. This car has benefited from being fitted with a 1960’s vintage Porsche 912 engine with a 1760cc big bore kit thereby increasing the output to 130 horsepower. This effectively raises the top speed from 97 mph to over 120 and reducing the 0-60 time by one-half. Extensive records and photographs of the engine build will also be provided to the new owner. In addition, front disc brakes and 12 Volt electrics have been fitted to make driving safer and more pleasurable. This example is bar far a most desirable Porsche as it combines a lovingly restored authentic Pre-A 356 Speedster with the most appropriate upgrades. Surely no early Porsche is deserving of the name, “Speedster.” This is truly a one-of-a-kind opportunity.

Dr. Ferdinand Porsche created the cornerstone of the Porsche family empire and godfather of the most prestigious and race winning marque of today. The production of the 356 began on Porsche’s family farm in Gmund, Austria in the late 1940’s. The first 50 cars were built almost by hand in various structures on the farm. These lovely Porsches looked and ran like no Volkswagen and were immediately winners in motor races. It began a new tradition of Porsche-designed cars dominating the race tracks of the world. The 356 Speedster was the lightest Porsche at 1334 pounds and therefore the quickest of the day. Even with modest horsepower, they embarrassed cars with engines 2 and 3 times their displacement. As the 356 is the foundation of the Porsche marque, the 356 speedster is the foundation of Porsche collecting. The grandest Porsche collections most often include a spectacular Speedster.