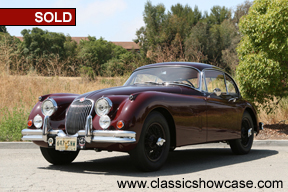 (SOLD) This handsome example of a 1961 Jaguar XK 150 is in great condition. The 150 is considered to be the most refined of the XK series. The vehicle went from an all out sports car to being a refined grand tourer. It received a frame off restoration in 2008. It has very classic lines and was the last of this generation of Jaguar XK. This vehicle has its original wire wheels painted to match and has been equipped with a battery cutoff and tender for storage. This XK has been upgraded to the 150S specification including a T-5 5 speed transmission and many other performance enhancements. This is an extremely nice example of the XK 150 with many upgrades that make this a very enjoyable car to drive and own.

First introduced in 1948, the Jaguar XKs caused a sensation; race car performance on the road, and with an unsurpassed level of sophistication and timeless beauty. During the XK 150 model run (May 1957 through March 1961), a significant engine modification became available, the S engine which featured changes in the head and intake manifold design. Additional changes in the design and structure of the bearings, clutch and flywheel were made in anticipation of the additional torque and wear. The identification-plate engine serial number defined the engine as delivered from the factory. Externally, the S-type models can be identified by an S placed on the passenger door beneath the quarter-window. XK150 can be distinguished from the 140 by its broad grille and flattened flanks. Other modernizations included the new tail lamps and square number plate on the boot. The XK150S roadster is highly appreciated by collectors who value its combination of luxury and performance with classic XK Jaguar style.