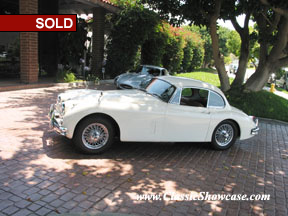 (SOLD) The third and final iteration of the XK range, started with the XK-120 in 1948 and continued with the XK-140 in 1954. By 1957 the XK design was looking a little dated, and Jaguar had set new standards with the introduction of a monococque design, the Jaguar Mk 1, the previous year. At the time it did not grab the worlds attention in the way that its predecessors had. However in hindsight it became recognized as a superb car, with more refinement than any previous XK. As before with the XK range, standard (steel wheel) and special equipment models were available, but a bewildering range of models was to evolve. First, in 1958 the S model was announced, equipped to special equipment specification, and with a more powerful engine, though still of 3.4 liter capacity. Late in 1959 further options became available with the introduction of the 3.8 liter engine, and the XK150 was available not only in 3.4 liter versions, but two versions (normal and "S") of the 3.8. All three body versions were available with all the engine options. Production all but stopped after 1960, but a very few cars appear to have been manufactured in 1961.