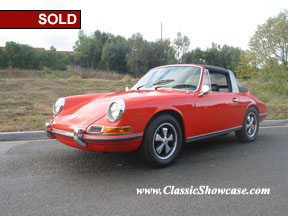 (SOLD) This Porsche 912 has been restored to a Show/driver level by Classic Showcase Inc. In the process of the restoration The vehicle has been stripped to bare metal repainted color sanded and buffed. Our professional upholsterer updated the interior with new seats, new panels, new carpet and a restored targa top. A Full mechanical service and vehicle detail was performed by Classic showcase. It has a new interior and new rubber. It has also been upgraded to dual Weber carburetors for better driveability. This is an original California car.

When the 911 debuted in 1964 the response from the market was enthusiastic, however the high price eliminated many potential buyers. Porsche, in response, put the familiar 1582cc 4 cylinder of the 356 into the new 911 body and introduced a lower priced 911 the 912. The car debuted in the United States in 1965 when the 356 went out of production. The car was produced from 1965 thru 1969 with apporxomately 30,000 examples. Throughout production only about 2562 cars were equipped with the targa top. Early in production the Targas came equipped with a flexible plastic rear window or soft window. This particular 912 is an especially rare soft window Targa.