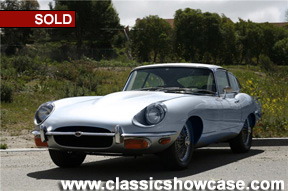 (SOLD) This vehicle has been restored by its previous owner, their goal for the restoration was to make it an excellent driver that could be taken to shows. He wanted it to be a beautiful car and made minor alterations to the body to enhance its beauty. The car is available now for the first time because the past owner is doing expansive worldwide traveling and does not want the car to sit for extended periods of time in storage. They had a tremendous passion for this car and it was their baby. They campaigned the car in 4 shows winning trophies in each. The car is currently registered in California with custom plates that read JAGZONE. A great deal of money was spent on the restoration which included performance upgrades to make for a better driver. Some of the upgrades include insulation to block sound and heat, and an electronic ignition for better performance.

While the Series II E-type was more radically altered than its interim predecessor, the essential construction remained the same and the body work differed only in detail. Modifications were made to the front of the bonnet, increasing the size considerably, the headlamp scoops were altered so that the inner walls now splayed inwards and the side/flasher were rather larger and positioned below the raised bumper. The vehicle also received heavier front bumper blades, motif bar, front and rear over riders were changed, new square number plate at the rear, a different grille was used in the rear of the bonnet bulge, and the washer jets were finished in satin chrome to avoid the risk of dangerous reflections.