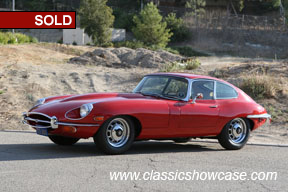 From the later changes in the Series 1 E-type came the Series 11, a 1969 model. The Series 11 XKE employed the 4.2 engine, and much improved Girling brakes. The internal instruments were changed to the rocker type, a more efficient heating system was added, and the ignition key and starter button merged into one. Among the exterior changers were forward moved headlamps, wrap around bumpers, and two big windshield wipers, versus the three of the early Series 1 cars. A new radiator aimed at cooling the heat-prone engines of the American cars was fitted, new camshafts and a modified valve gear which made the vehicles run quieter and more efficiently. Fourteen years and three series later, the Jaguar E-Type closed production, but almost 35 years after is a mainstay among Jag collectors. Collectors and enthusiasts alike recognize the XKE as a stunning vehicle far ahead of its time, making the XKE one of the most desirable collector cars available.