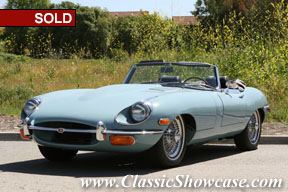 (SOLD) It has been a 1 owner car since new and was purchased on 12/20/69 from Peninsula British Cars in Palo Alto, CA. The car comes with a log book for service work done through 1994 and there are records and receipts. The original factory warranty book and temporary registration from 1969 when the car was driven from the dealer lot are also included as well as all the registrations up through 1994. This is a wonderful car with 77,858 original miles. The original AM/FM Philips radio is still working. The engine has 9.1 compressions and is a beautiful driving and running car in great condition. This car would appeal to not only the collector but would be a great first time Jaguar for any newly interested buyer.

While the Series II E-type was more radically altered than its interim predecessor, the essential construction remained the same and the body work differed only in detail. Modifications were made to the front of the bonnet, increasing the size considerably, the headlamp scoops were altered so that the inner walls now splayed inwards and the side/flasher were rather larger and positioned below the raised bumper. The vehicle also received heavier front bumper blades, motif bar, front and rear overriders were changed, new square number plate at the rear, a different grille was used in the rear of the bonnet bulge, and the washer jets were finished in satin chrome to avoid the risk of dangerous reflections. Reclining seats were fitted to the Series II cars as well as head rests that were adjustable for height.