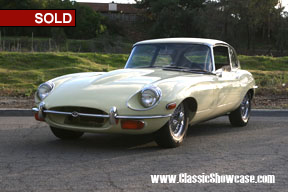 (SOLD) The 2+2 model incorporated a larger windshield to help give access and room for the rear passengers. The 2+2's occasional rear seats necessitated considerable redesign of the rear bulk head area; it also had a larger luggage compartment. The previous owner maintained and services the vehicle as needed. It has been garage kept and well cared for. The car has had a recent detail inside and outside the car. The interior and exterior are in good condition. The interior is very comfortable for extended trips. This 1968 Jaguar XKE Series 1 1/2 2+2 would be a good addition and a fun car to own and drive.

The series “1 ½” as the model has retrospectively been named, was a curious interim creation that was part Series 1 and part Series 11. The Series 1 ½ E-type was produced only in 1968 and is a rare car to find. The 1 ½ had significant changes made to it such as: open headlights, an altered bonnet, a re-designed door, two carburetors, rocker switches on dash, a wing mirror on the driver’s door, hazard warning lights and the steering column was modified.