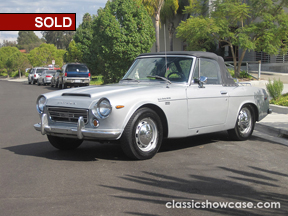 (SOLD) This Datsun Fairlady is a very original and complete classic, which makes it rare & collectable. The previous owner recently installed a brand new top and windshield, and has serviced and maintained the vehicle regularly. This Fairlady runs and drives well, and is a great candidate to improve the cosmetics as you go. The car is acceptable as a Driver “as is”; if you want to take it to a higher level, we recommend taking out the small dents that are easy to remove, repainting the car, and re-chroming the brite work. Some new carpeting and panel replacement would make the car really shine. This Datsun would make a great car if you are just starting a collection, or adding to your existing. It is economical to drive, and will continue to appreciate in value over time. *Classic Showcase has not performed any maintenance or any other automotive service to this vehicle.

The Datsun Sports (called Datsun Fairlady in the home market), was a series of roadsters produced by Nissan in the 1960s. The series was a predecessor to the Z-car in the Fairlady line, and offered an inexpensive alternative to the British MG, and Triumph sports cars. The line began with the 1959 "S211" and continued through 1970 with the "SP311" and "SR311" line. Many changes were made for 1965. Though the 1.5 L SP310 continued in production through January, a new 1.6 L R16-powered SP311 and SPL311 joined it. Marketed as the Fairlady 1600(in America was known as the Datsun 1500), it featured 14 inch wheels and minor exterior changes. The front suspension was independent. The engine produced 96 PS (71 kW; 95 hp). The hood badge said "DATSUN" in individual letters, the rear badge said "DATSUN 1600", and the side badges said "Fairlady" (Japanese market) or "DATSUN 1600" (export market). The SP311 continued in production through April 1970. The first Nissan Silvia coupe shared the SP311's platform. The CSP311 Silvia had an R16 engine developing 96 hp and used a modified Fairlady chassis. The Silvia was the first car fitted with Nissan's new R engine. The R engine was a further development of the 1488 cc G engine.