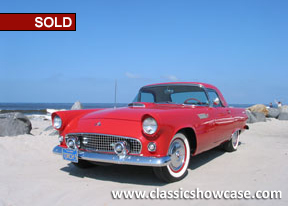 (SOLD) Restored to show in the late '70's by its fanatic owner, this 1955 T'Bird is a "Senior Car" as designated by the Classic Thunderbird Club International (CTCI). To earn this distinction, a car must place Best of Class or Best of Show in the Primary division of a CTCI regional or national show. After achieving this status, the car went on to take a number awards including Senior Original Best of Class. It also was featured on the cover of CTCI's.

Early Bird magazine and represented 1955 in a set of T'Bird posters. Authentic down to the last detail, every component, hinge, latch, bolt, etc. is painted its original color or plated as it was when it rolled off the assembly line. While not shown in a number of years, the car has spent every night since its restoration under a cover in its garage, with the single exception of a few overnight shows. Moreover, it's been driven only enough to get routine exercise, and it's been scrupulously maintained with such things as a recently rebuilt brake system, rebuilt carburetor, new battery, etc. One of the last '55s built, the car rolled off the line on August 10, 1955. Little is known about its early history, but to the best of the current owner's knowledge, it was owned by a fireman in Encino through the early '70's who rebuilt the engine and seemingly everything else that moved. Purchased from his family, the current owner stripped it down to bare metal and repainted it with a hand rubbed acrylic lacquer in the original Torch Red color. Virtually everything was repainted, rechromed, replaced, or reupholstered, all authentically original. This originality is confirmed by its capturing nominally 45 of the 50 authenticity points in its last three Senior Division shows. Moreover, it scored total points in the mid 260s out of 300 in these same shows.