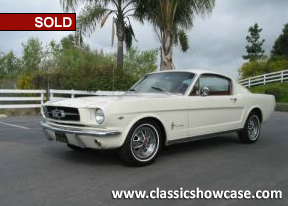 (SOLD) One of the best examples we’ve yet to come across, this is a first year of production vehicle making it an extremely collectable Mustang. This very popular and collectable car is as desirable now as it was then. Don’t pass up on a chance to own a piece of American muscle history. Our car is a matching numbers, very original, CA black plate vehicle that has been restored to an excellent condition show driver with bucket seats, aluminum radiator, center consol, AC, and power steering. The restoration process was very complete with excellent fit and great attention paid to detail.

On March 9, 1964 the first production Mustang rolled off of the assembly, stepping into the thick of the muscle car race by introducing a new Ford for the 1965 model year in reaction to the GTO. The Mustang 2+2 or fastback, boasted the Hi-Po 289 cu. in. 271 bhp engine and was an eye-catching car with reputable speed. The car was 181 inches long, and was originally offered with three engines—a 170 C.I. six cylinder, a 260 C.I. 2 bbl V8 or a 289 C.I. 4 bbl V8 and came with a three-speed, four-speed or automatic. The 2+2 fastback package also included upgraded suspension and wider tires. In order to keep production costs down, many of the Mustang's components were taken from the Falcon, including most of the drive train. The Mustang was advertised as "the car to be designed by you", therefore had a range of interior, exterior and drive train options. By the year’s end, Ford had sold 263,434 of its new mustangs, and 418,812 by its first anniversary.