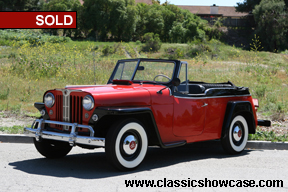 (SOLD) This 1948 Willys Jeepster Phaeton in red and black has much to offer as a rugged early sport-utility vehicle. It recently received new canvas side curtains and features a black vinyl interior, under-dash heater, and wide white wall tires with matched rear-mounted spare.

After World War II, Willys-Overland realized that there soon would be a large market for a civilian version of the Jeep with returned serviceman. After the war, the company decided to resume production. Many returning serviceman were eager to purchase one as they knew first- hand the vehicle’s capabilities. Designed by Brooks Stevens and introduced in 1948 as the 2T and 4T models, the Willys Jeepster shared a chassis with the Jeep station wagon and was perfect for the returning troops.