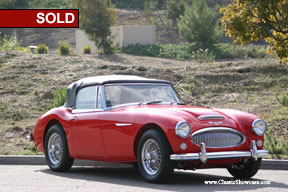 (SOLD) The original owner of this Austin Healey 3000 MK III BJ8 stored the vehicle for over 20 years. Shortly before his passing he revealed the existence of the Healey to his offspring. They found the car along with three other dilapidated cars in a garage in Monterey Park CA. It was subsequently sold to a retired gentleman who was an Austin Healey connoisseur who spent five years and no expense meticulously restoring the car. This is an original California black plate car. This complete frame off restoration is well documented with photographs. It has been driven under 100 test miles since restoration. It is set up for and sorted out for the new owner to enjoy, drive, and show.

Curt Arndt, from Southern California, a well known Austin Healey Connoisseur and chairman of the Austin Healey concourse committee has reviewed and driven this car and states that this vehicle is very well restored and authentic and would be a contender for the gold concourse level if shown. It would be hard to find a better Austin Healy BJ8 anywhere in the world.