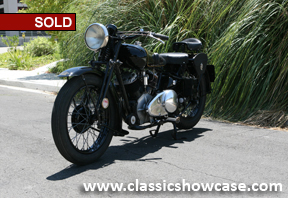 (SOLD) Imported from the UK with all duties paid, this rare 11.50 V-TWIN now has a fresh California title. It has had a recent sympathetic restoration and servicing, and is ready to driven, shown, and enjoyed!

Between 1924 and 1940, George Brough built 3,048 superb, world-renowned motorcycles of various models including this, the 11.50 twin, which was powered by a large 1,000-cc J.A. Prestwich side-valve engine. Utterly reliable, and often fitted with a sidecar for police use, 308 were made, making them even more rare than the famed SS100. A cradle frame was used, with either Castle or Brampton Monarch Forks and a four-speed Sturmey-Archer gearbox with hand change was fitted. The engine had detachable aluminium cylinder heads, valve spring enclosures and dry sump lubrication, and a specially tuned one reached 101 mph.One of 47 built in 1935, the 11.50 offered today was originally dispatched from Haydn Street on 1st July 1935 bearing frame number 8/1499 and engine number LTZ/R/46709/5RF with Staffordshire registration number RE8208. At the time it was fitted with a Swallow sidecar and a rigid frame. Like many Broughs, the machine was returned to the factory in 1952 and fitted with a sprung frame, number M8/2214. This was one of the spare frames made in September 1939 before the outbreak of World War II, which halted production. It is only two digits away from the very last frame made. At this time, the motorcycle was also fitted with a Norton gearbox and re-registered with a Warwickshire number MUE 138. Twelve years later, whilst in the ownership of one Mr. Priestly of Kings Norton, Birmingham, MUE 138 received a replacement engine, number LTZ/D/35129/5, which it retains to this day. This was taken from another 11.50 with the frame number 8/1338, which had left the works on 28th November 1933 bound for service with the Glamorgan Constabulary. Now remaining in original condition, it is complete and in fine running order, having just been treated to a service and general check-over by a Brough specialist. It is offered with a new MoT, UK V5C logbook and letter from the Brough Superior Owners Club Machine Registrar.