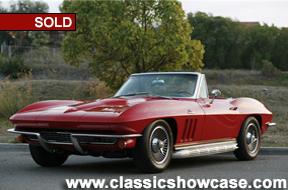 (SOLD) This is a California black plate, factory built (big block) Corvette Stingray Convertible that is in spectacular condition. It was previously owned by a collector in Southern California, always well maintained and garage kept. This Corvette has been fitted with the original 427 / 425hp engine block from the factory and has benefited from a ground up restoration. The attention to detail and a quality restoration definitely appears in this Stingray. It has knock off wheels, an original AM/FM radio in the dash, and a side exhaust.

1966 extended the big block Corvette line with the introduction of the legendary 427 cu. in. motors. They were bored and stroked versions of the 396 cu. in. 1965 motors and were available in two flavors: 390 hp and 425 hp. The extra cost for the 425 hp was justified as it included four bolt mains, impact extruded aluminum pistons, a very aggressive camshaft, Holly 780 CFM carburetor mated to a aluminum intake and a free-flowing exhaust. There are many reports that the 425 hp engine actually featured more horsepower (450 hp) than what was originally quoted.