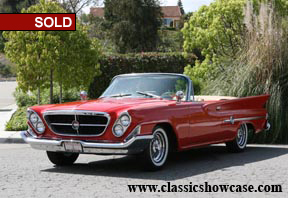 (SOLD) This beautifully restored 1961 300 G features its unmistakable tailfins. It was the epitome of luxury and style merged with exceptional performance. The 300 G was well ahead of its time. One of approximately 200 equipped with factory A/C and approximately 50 of these vehicles are known to still exist today, making it one of the most desirable vehicles of the 1960’s among the car collector community. It features a 375 hp, 413 cu. in. V8 engine, TorqueFlite three-speed automatic push-button transmission, independent front suspension with parallel torsion bars, live rear axle with semi-elliptic leaf springs, four-wheel hydraulic drum brakes, unique cross-ram intake system with two four-barrel carburetors, period correct Kelsey Hayes wire wheels, wide whitewall tires, power push button AM radio, power windows, power top with top boot, power brakes, and power steering. This vehicle comes with a spare tire, jack and owner’s manual. It runs and drives great with a lot of power and is very stylish. It is well head of its time with its contemporary art deco design with comprehensive styling of its instruments and many features. It has large bucket seats and a spacious interior that puts you in control of your own “command center” behind the wheel. As one of the rarest automobiles of all time, this is an outstanding example and great investment that would enhance any collection, large or small.

At age 37, Robert MacGregor Rodger was a 15-year veteran of Chrysler in 1953, Rodger was convinced that a standard 331-cubic-inch (5.4-liter) Hemi could produce 300 reliable and civilized horsepower. Officially offered for sale on February 10, 1955, the first Chrysler 300 was athletic-looking. With 300 horsepower aboard, it was among the quickest cars of its time, getting to 60 mph in just 9.8 seconds. Though styling was certainly what drew most buyers into showrooms, 300 “letter series” also offered a number of impressive engineering feats, most notably a fully-unitized construction for 1960. These cars were the vehicles that rekindled interest in performance among major American manufacturers after World War II, and thus can be considered the muscle car’s ancestors, though much more expensive and exclusive. This particular 300 G was previously owned by a collector.