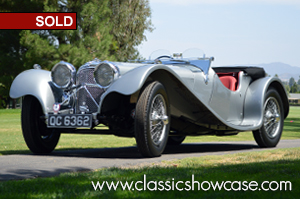 (SOLD) Classic Showcase performed a comprehensive restoration to this rare 1938 Jaguar SS 100 3.5L to the highest Show level possible. Included in the restoration process, the vehicle has been dissembled, and the interior has been removed and documented, the vehicle body has been worked, the metal finished, fitted, and leaded as needed, and all body parts and chrome will be fitted to the car; It has been primed, sealed, has had a base and clear coats applied, and was color sanded and buffed to a beautiful finish. All systems are being gone through and are being restored and replaced as necessary. The transmission, clutch, and hydraulic systems are in the process of being fully restored, and the car will receive all new rubber , grommets and seals. In addition, the britework will be completely re-plated to Show level quality as well. The car is in the process of receiving all new upholstery, and will be fitted in the correct materials by master upholsterers in our Upholstery Department. The roadster's parts and components are in the process of being restored in the proper colors and finishes as well, and we will be using NOS parts wherever possible. Extreme attention to detail is being given because of the importance of this early, highly original SS100 Roadster. A DVD of the restoration process, along with a Heritage Certificate of authenticity will accompany the vehicle. This SS100 is a rare and truly amazing 1930s time capsule that will undoubtedly cause a sensation once it's comprehensive restoration has been completed. Please view the photo gallery to view the progress of this very special Roadster!

The Jaguar SS 100 was one of the first cars to bear the Jaguar name, although at the time it was just a nameplate. It wouldn’t become the corporation’s brand name until after World War II. But more important, it was the car that elevated the parent company from relative obscurity—just one of many small-volume British carmakers struggling in near anonymity—to a purveyor of some of the most stirring sports cars of the pre-WWII era. Unveiled at the 1937 London Auto Show, the 3.5-litre SS 100 quickly demonstrated its upgraded performance in a variety of competitive venues, including Brooklands, the Alpine Trials and the Welsh, RAC and Monte Carlo rallies. In all, 190 2.5 SS 100s left the Coventry works; 3.5-litre production reached 118 cars before the Coventry works was changed over to military work, making aircraft components. The SS 100 offered here, chassis 39032, was delivered through the Parker’s Bolton agency in Manchester, England in 1938. It spent the first 24 years in the United Kingdom before it was acquired by Eugene Faust, who brought it to New York in 1962. Faust kept the car for seven years, a stewardship that included a restoration. In 1969, Faust sold the SS 100 to Ron Keno, a successful antiques dealer and art teacher residing in Mohawk, New York. Though its seasons have been short, as the Kenos only drove the car during the summer and autumn, the SS 100 has travelled extensively, including its most ambitious tour, the 1998 1,000-mile Louis Vuitton China Run. 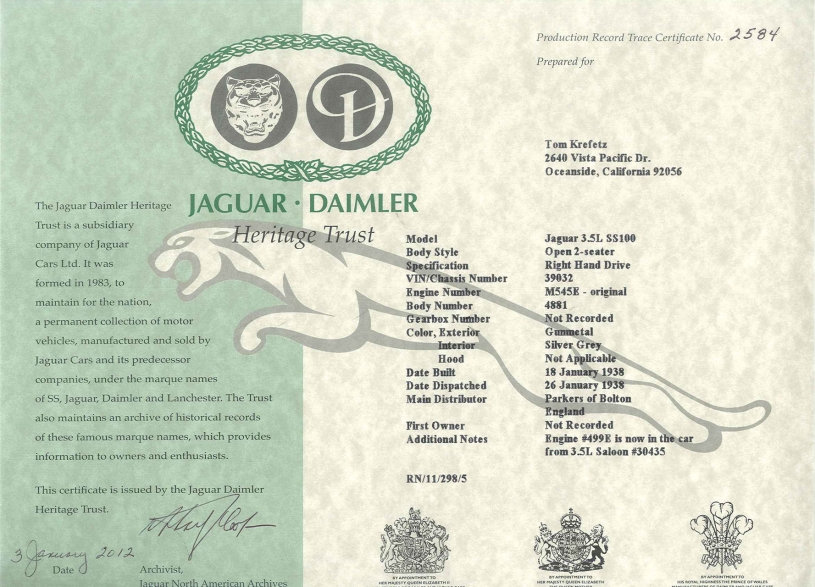