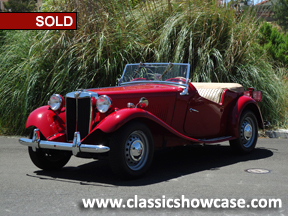 (SOLD) Striking in maroon and tan, this 1953 MG TD Roadster is a handsome, rust-free example from Southern California with limited ownership, complete with an original California “black plate” that was last registered in 1972 and currently registered on a “blue plate” which is in effect through January 2013. It is also accompanied by ownership documents dating back to the 1980s providing a detailed account of service and restoration history for the new owner. Most recently, the specialists at Classic Showcase performed a major vehicle servicing, as well as a complete detail. This MG runs great, and has been meticulously maintained and serviced throughout the course of its ownership, in short representing a very nice and enjoyable driver that could be elevated to show level with relative ease. As offered, it will certainly make a worthy addition to the collection of any confirmed MG enthusiast or the casual collector.

Few sporting cars have enjoyed the lasting popularity of MG’s T-Series roadsters. Beginning with the TA in 1936, these light and attractive cars opened a new world of affordable enjoyment, particularly for the many former GIs who first encountered them during wartime. The TD appeared in 1949 specifically for the U.S. export market, with carefully refined handling and left-hand drive. Its much-stiffer welded chassis was derived from the Type Y saloon and featured boxed side-rails, independent front suspension, rack-and-pinion steering and new 15-inch ventilated wheels. The engine and gearbox of the TC were retained, as well as its classic body, now slightly widened and easily identified with new front and rear bumpers. In 1953, Britain’s Autocar wrote, “the feel of the car on the road inspires confidence and there is the impression that even an indifferent driver could make a good showing behind the wheel; however long the journey, the actual driving of the car is beguiling all the way.”