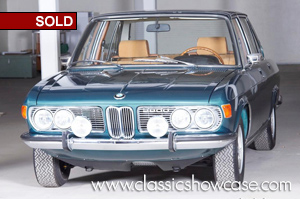 (SOLD) This beautiful BMW 2800 has been stored in a private collection in Germany since the day it was delivered from BMW, and has never been registered. Having covered only 39km (approx. 24 miles), and with full documentation, makes this car very rare and collectible. 1969 was one of the very first years of the E3 model, and it differs from the later and more common Series 2, with its aluminum front grilles, different tail lights, horizontal C-pillar vents, trim etc. The cosmetic and mechanical condition is fantastic, and the car is still NEW in every way. A restored car will never reach this level of originality. The car is finished in single stage Tundra green metallic and beige corduroy. The mechanical parts of the car have been preserved as well as cosmetically. The car has been started regularly, moved around to keep fresh gas in the tank and carbs, and to lubricate all moving parts. All rubber around windows, engine compartment, trunk, tires etc is still soft and has not creeped the slightest bit. Bare metal parts such as exhaust manifolds, on the engine block, and brake discs are not even surface rusted! The engine, gearbox, rear diff, brake calipers, etc. are all in order, with no leaks or the slightest sweating. There has been no cleaning done to make anything look dry. Just as the rubber seals in the doors, trunk and engine compartment, the oil seals are in great shape. Fluids have been drained and replaced regularly to avoid absorption of humidity. As well, the valve guide seals aren't stiff, and you can start the car indoor with no smell or fumes!

Almost always eclipsed by the later 3.0, history has forgotten BMW's 2800. Strange, as the 2800 looked just as great as the later models and offered capable performance from a refined power train. The E3 2800 was introduced at the same time as the E3 2500. Both models arrived in late 1968 as 1969 models, with the 2800 as the upper trim level. The 2800 used a 2.788cc straight six engine, producing a hearty 170hp at 6.000 rpm. A chain-driven single overhead camshaft ensured longevity, as did a crankshaft that rode in 7 main bearings. Carburetion was by twin dual-throat Zenith units which, though some of the car's more temperamental features, were well-matched to the motor. The E3 was BMW's first large saloon since the 502 series, the company's first real post-war car. The design of the E3 used the same principles as it's ground breaking and highly successful Neue Klasse small saloon. The suspension used the same Macpherson strut and semi-trailing arm layout to ensure class leading handling; only minor geometry changes were required. They fed the 2800's triple-hemispherical combustion chambers in a design that BMW expert Fred Larimer called 'so efficient in its original form that it met U.S. emissions standards without additional emissions controls. Power was delivered by the sophisticated engine to either a standard 4-speed manual, or an optional 3-speed automatic transmission. Both units were built by reputable transmission maker ZF, but the automatics were not particularly well suited to the cars and were less reliable than the manuals. A limited-slip differential was offered as an option to enhance traction at the rear wheels. In the US, the legendary Max Hoffman shaped the course of the E3. The E3 was a great car, but that came at a price. Hoffman ordered a US only model entitled the Bavaria; this was a stripped down 2800, and sold at a much more competitive price. All E3's used the new M30 "Big Six" engine with single overhead cam. This engine carried on until 1993 in the 735i and 535i, a testament to its advanced 1968 design.