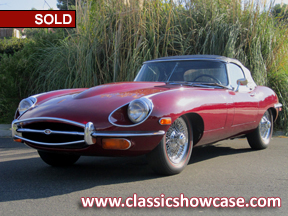 (SOLD) This original XKE is a two-owner, meticulously maintained California black plate car that was purchased from the first owner on February 23rd,1973, and includes the original purchase agreement. Always garage kept, this E-Type is in very good condition, with a new interior installed at 84,870 miles, an engine rebuild performed 21,000 miles ago, along with the seats, console and pad, and top boot being reupholstered in 2002. The Roadtser includes: two rare California black plates, a jack in its original bag, spare tire, a boot for the soft top, hardware equipped for a Tonneau cover, soft grey car cover, fire extinguisher in the trunk, and a pair of sun visors. For dependability and safety, the Roadster comes equipped with electrnic iginition, and a locking gas cap. As well, the OTS features a Blaupunkt AM/FM cassette stereo, bright Chrome Wheels and a set of Michelin 185 x 15 Redlines, ready for the road. It has been professionally serviced by British Jaguar specialists, and comes complete with (2) incredibly detailed log books of service and gas fillings. This E-Type provides not only a great driving experience, but also provides an excellent example for the enthusiast who can appreciate the meticulous details of an original E-Type such as the one being offered here!

While the Series II E-type was more radically altered than its interim predecessor, the essential construction remained the same and the body work differed only in detail. Modifications were made to the front of the bonnet, increasing the size considerably, the headlamp scoops were altered so that the inner walls now splayed inwards and the side/flasher were rather larger and positioned below the raised bumper. The vehicle also received heavier front bumper blades, motif bar, front and rear over riders were changed, new square number plate at the rear, a different grille was used in the rear of the bonnet bulge, and the washer jets were finished in satin chrome to avoid the risk of dangerous reflections. Reclining seats were fitted to the Series II cars as well as head rests that were adjustable for height.