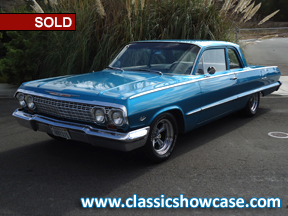 (SOLD) This Chevy Biscayne is a California car, originally purchased from Carsten's Chevrolet dealership in Alturas, California. Under the hood, the Biscayne comes equipped with a 350 four bolt main block, Corvette camel-back cylinder heads, an Edelbrock 4 Barrel Carburetor, a late-model HEI distributor, after-market aluminum pulleys, chrome air filter and valve covers, and a 3 speed “On The Tree” manual transmission; In addition, it features manual steering, a dual exaust system with Turbo mufflers, a new battery, and mechanical gauges mounted under the dash that display oil pressure, battery charge, and temperature. On the inside, the Biscayne has manual window locks, a pleated diamond-shaped light grey velour split-bench front seat, pleats on doors and rear quarter panels, white star-shaped patterned sun visors, and a dark grey velour headliner. On the exterior, there are two outside Chevy rear view mirrors with logo, outside vents, and comes with a nice car cover. The Biscayne is audio-equipped, and still has it's original AM radio in dash, as well as a modern Sony AM/FM CD player in the glove box, with a nice speaker combination of 5x8 speakers under the front dash, and larger 6x9 speakers located in the rear shelf panel near the trunk; Also included in the Biscayne's sound system, is a powerful amplifier with two box Base speakers in the trunk (not currently hooked up, but come included with the car). This classic Biscayne runs and drives very well and is ready to be driven and enjoyed as-is, or taken to the next level with a customized restoration!

The Chevrolet Biscayne was a series of automobile produced by Chevrolet for model years 1958 through 1972. Named after a show car displayed at the 1955 General Motors Motorama, the Biscayne was the least expensive model in the Chevrolet full-size car range. Biscayne’s were produced primarily for the fleet market, though they were also available to the general public — particularly to those who wanted low-cost, no-frills transportation with the convenience, room and power of a full-size automobile. While most Biscayne’s were sold with a six-cylinder engine through the late 1960s, the V8 engine became the more popular power plant by the early 1970s. The 1963 Chevrolet Biscayne enjoyed a boxy face-lift, with body side contours cleverly altered to look like major changes had taken place. "Clean-cut as a jewel," the sales brochure claimed, "smooth-riding as a jet." Ads touted such features as "air-washed rocker panels," self-adjusting brakes, and a longer-life exhaust system. The standard Turbo-Fire 283-cubic-inch V-8 got a boost to 195 horsepower. 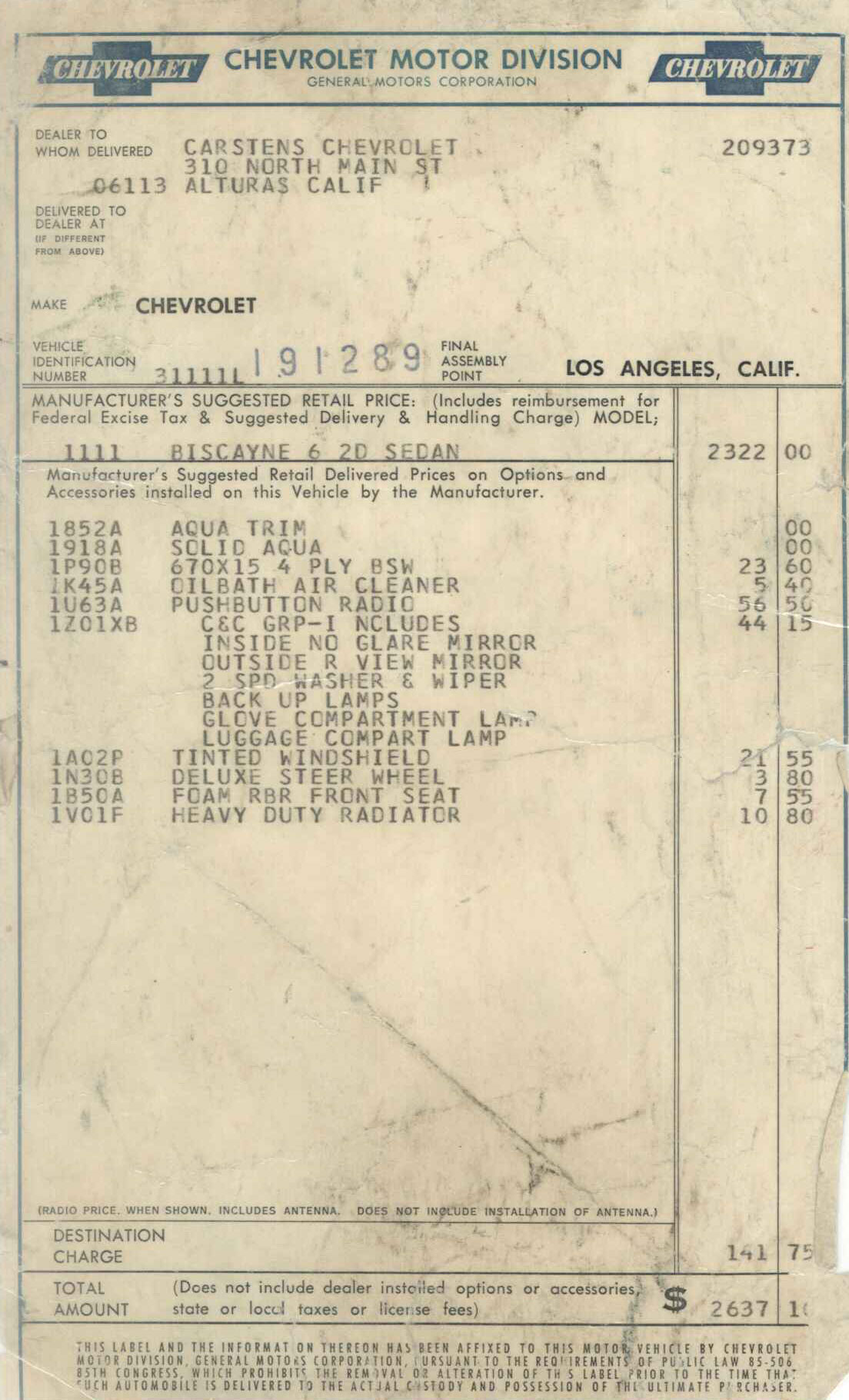