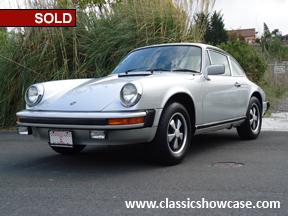 (SOLD) This Porsche 911 S Coupe from 1977 is an exceptional original example, being an unmolested survivor with an irreplaceable patina of originality in a wonderful color combination. In fact, the current owner has noted that when you shut the doors, it even retains the original “ting”. It was manufactured February 1977 and its very fastidious prior owner commissioned a engine rebuild by a Porsche expert, with the work documented by receipts, which included new rings, and guides being installed. The pistons are factory Mollies and this verifies the original mileage as they are standard with no wear, but we installed new rings and guides, as well as servicing the injection & oiling system. Other work included a restoration of the hydraulic system, the installation of a new master cylinder, installation of a new fuel distributor and injectors, the gas tank was removed and resealed, a new fuel distributor and injectors replaced along with a new fuel pump installed. Other highly desirable factory features include air conditioning, an electric sunroof with new correct and proper cables, seals and bushings installed , the factory-original Blaupunkt AM/FM radio and speakers, and iconic Fuchs five-spoke alloy wheels, plus the original jack, tools, owner’s manual and keys. With fewer than 21,000 original miles travelled, this 911 is clearly a very special and well-maintained example for the truly discriminating Porsche collector and enthusiast.

By the time the fourth and final-series 356 model (called the “C”) debuted in 1964, Porsche’s next model series, the 911, was quickly being readied for production. The new Porsche retained the rear-engine layout and a unit-body chassis, but a smooth two-liter, air-cooled flat-six replaced debuted, mated to a four- or five-speed all-synchromesh gearbox. The 911 was introduced at the Frankfurt Auto Show in September 1963 and while bearing a strong familial resemblance to the outgoing 356, it was at once more powerful, quieter, smoother, and more spacious. The 911 body was functional and breathtakingly attractive in an ageless design that has remained remarkably unchanged right up to the upcoming “991” generation of 911s for 2013. Continuous development has kept the 911 at the leading edge of sports cars and its virtually countless victories have made it the car of choice for serious racers worldwide.