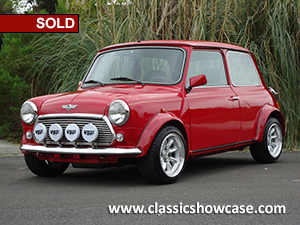 (SOLD) This left-hand drive Mini was originally produced during the late-1990s and it is titled as a 1971 model, thereby making it emissions-exempt in California. With approximately 500 miles from new, it is highly equipped with a fuel-injected 1,300 cc engine, a four-speed gearbox, an oil cooler, power brakes with front discs, driving lights, hydraulic steering, Minilite wheels with Bridgestone Potenza tires, plus such late-production features as a driver’s side airbag and a sporting two-tone interior. It also features a new full-size spare tire, two keys with remote entry, a complete alarm system, tools, and a washer bottle in the rear. It is also radio-prepped with speakers and antenna already installed and ready for your favorite stereo unit. Simply put, this amazing Mini perfectly combines iconic styling with the comfort and performance of today! Please note: While this vehicle was originally produced circa 1998/1999, it is currently titled in California as a 1971 model.

The 1959 debut of famed designer Alec (later Sir Alec) Issigonis’ Mini rewrote the book on small cars. Barely 10 feet long, with a small but peppy transverse four-cylinder engine, 10-inch wheels and front-wheel drive, the Mini could carry up to four adults at 75 mph and achieve nearly 40 mpg. The car was a huge hit, and by the time production finally ended in 2000, nearly 5.5 million had sold. In testament to its groundbreaking nature, the Mini was voted the second most influential automobile of the 20th Century, behind only Henry Ford’s Model T. While initially intended as practical, economical transportation, the Mini, as massaged by famed race-car builder John Cooper, took the international racing world by storm by winning the Monte Carlo Rally from 1964 through 1967, in addition to countless circuit-racing victories. License-built versions of the mini were also produced in both Italy and Spain.