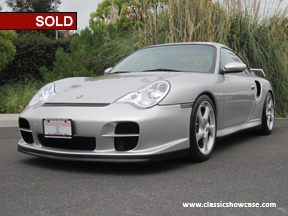 The Porsche 911 GT2 is a sports car built by the German manufacturer Porsche since 1994. It is based on the 911 Turbo, and uses a similar twin-turbocharged engine, but features numerous upgrades, including engine upgrades, larger brakes, and stiffer suspension calibration. The GT2 is significantly lighter than the Turbo due to its use of rear-wheel drive instead of all-wheel drive, and the lightening or removal of interior components. 911 GT2 Porsche was built in 2001. With Twin-Turbo Flat-6 engine type, sized at 3600 cm it was able to deliver 456 hp @ 5700 rpm and 620 Nm of torque. It is a RWD driven car, with Rear-Engine engine location. The car comes with a 6-Speed Manual transmission. Its official fuel consumption is 15.68/10.69 l/100km. Cars redline is at 6750 rpm.