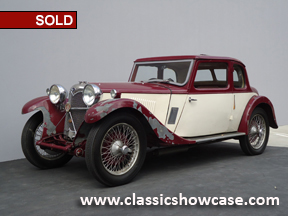 (SOLD) This is a complete 1933 Riley example that has tremendous patina, with a two-tone color combination of burgundy and white, with a red interior. It is a very original and stylish low-slung 2-seater coupe that was one of the rarer Riley bodies fitted to the 12/6 chassis, and features the following original components: sunroof, a full sized spare tire, the original wire wheels, a crank out windshield, Pyramid fire extinguisher, tool storage compartment, 2 wipers, step boards, and wood trim. In addition, the Lincock features a semi-elliptic suspension, a 4-speed gearbox, Riley continuous cable braking system with cam operated shoes and 13" drums, and a 10 gallon capacity fuel tank. With only several dozen of these coupes produced, this restoration-ready Lincock is a very rare and highly collectable example that is sure to please!

During the late 1920's and most of the 1930's, this small family run Coventry firm produced some of the best small sporting cars in the world, whether sedans, Tourer’s or out-and-out sports cars. The excellence of the engines, and the stylish coachwork and delightful handling all set standards for performance and design throughout the industry at this time. The Riley Company was later merged into British Leyland which is now a trademark of BMW. Around 1905, the first Riley motor car was created. Within a few years, Riley’s other endeavors, like motorcycle production, was halted to focus on the automobile. After World War I, Riley's efforts in motorsports increased, with their vehicles appearing in races by privateers and works cars. Appearances in hill climbs and races such as Leman’s were met with moderate success. Famous drivers such as Stirling Moss would pilot a Riley during racing competition.