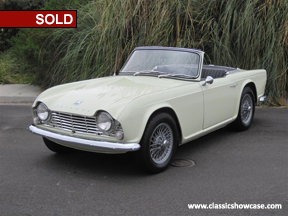 (SOLD) The car has benefited from a comprehensive professional restoration. Suburb craftsmanship with attention to detail, nothing has been overlooked. Included in the restoration process, the vehicle was stripped to bare metal, metal finished, leaded, all body parts and chrome were fitted to the car, it was prepared for primer, sealer, paint, base, clear coat, color sanded and buffed to a fabulous finish. All systems have been gone through and the engine was rebuilt back to factory specifications. The clutch system and hydraulic system were restored and the car received all new rubber, and a complete new wire loom. All of the brite work was re-plated, or replaced. The car received a complete new proper tailored and fit interior; in the correct materials.It features restored painted wire wheels, 5 new tires, and a 4 speed. The car includes a tool roll in the trunk, proper Lucas battery, and an original Triumph AM radio. This is for a true Triumph collector looking for the best. The car has only traveled a few test miles since the restoration. This is a highly collectable car.

The Triumph TR4 is a sports car built in the United Kingdom by the Standard Triumph Motor Company and introduced in 1961. Code named "Zest" during development; the car was based on the chassis and drivetrain of the previous TR sports cars, but with a modern Michelotti styled body. 40,253 cars were built during production years. The TR4 improved performance for the little sports car. The track was enlarged and the steering now used a rack-and-pinion unit. The transmission was now fully synchronized on all gears and the engine was enlarged slightly. An optional Laycock de Normanville electrically operated overdrive could be selected for second, third, and fourth gear. The wheels original used were 15x4.5 inch disks. One of the more typical tires was the 165x15 bias ply. 48 lace wire wheels could be ordered and were often painted the same color as the car. Other popular options were to have them painted silver, matte, or polished chrome. The TR4 was successful both in sales and in sporting events. They could often be seen competing in SCCA, hill-climb, and rally events where they provided plenty of podium finishes for their owners. The wet-sleeve engine was very convenient. The cylinder liners and pistons were easily changed allowing the vehicle to compete under different capacity rules. Some TR4 racers were given a supercharger which raised the 105 bhp SAE output to over 200. In 1965 the TR4 was given an independent rear suspension, slightly modified frame, and various styling changes. In response to these changes the TR4 was dubbed the TR4A. Production of the TR4A continued until 1968 when it was replaced by the six-cylinder TR250.