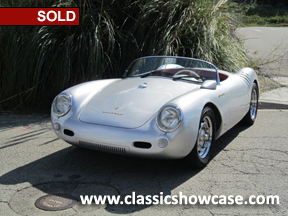 (SOLD) An exacting replica of Porsche’s most iconic 1950’s Sportscar, finished in the authentic color scheme of silver over red leather, this is a great presentation both mechanically and cosmetically, and nearly unmistakable for the car owned by legend, James Dean. This specific 550 Replica was manufactured by Vintage Spyders located in Orange, CA and is based on the 1955 Spyder that is designed to use the front suspension, engine and transmission from a type 1 VW. An interesting fact about this particular replica is that it was Titled in California as a 1956 Porsche rather than a NSP vehicle so it is not recognized as a new vehicle and will never be entitled to smog certification. The body is fiberglass painted basecoat clear coat, color sanded and buffed, engine compartment coated in Zolotone, 911 shroud, modern oil cooler and filter, dual Weber 44 Carburetors, 3.44:1 Supertrans differential, Neal Pedals, Hydraulic Clutch, 550 Spyder competition shifter, Spyder free-flow dual coated exhaust system, Painted Tubular Chassis, genuine VDO instruments, flush banjo steering wheel, and bright H4 headlights. In a nutshell, it is an exceedingly high quality build that is capable of pushing the envelope on the track and the open road. The value of the authentic 550s continue to climb to the point that they are outside most collectors range as they are well into the multi-million dollar stratosphere. That is a significant sum to even the wealthiest collectors, especially if they are looking for a car they can actually drive and enjoy on a regular basis. This 550 simply puts the fun factor on high and can be the perfect way to experience the reason Porsche became the legend that it is today.

Inspired by the Porsche 356 which was created by Ferry Porsche, and some Spyder-bodied prototypes built and raced by Walter Glöckler starting in 1951, Porsche decided to build a car designed exclusively for use in auto racing. Introduced at the 1953 Paris Auto Show, the 550 Spyder was so low to the ground, German Formula One racer Hans Herrmann drove it under closed railroad crossing gates during the 1954 Mille Miglia. Its initial wins and obvious competition prowess dubbed the 550/1500RS or ‘Spyder’ the ‘Giant Killer.’ Revised for 1956, the 550A, which had a lighter and more rigid spaceframe chassis, gave Porsche its first overall win in a major sports car racing event, the 1956 Targa Florio. Porsche continued development of this concept and in the following year, 1957, the 718 or RSK was even more successful, scoring points in Formula One as late as 1963. Variations on the Spyder would continue through the early 1960s in the form of the RS 60 and RS 61. A descendant of the Porsche 550 is generally considered to be the Porsche Boxster; the Spyder name was effectively resurrected with the RS Spyder Le Mans Prototype.