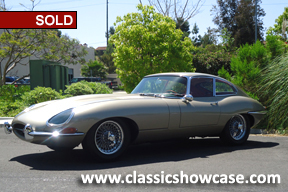 (SOLD) The previous owner acquired the E-Type approximately a few years ago, with the car in remarkably original, rust-free condition with just 16,650 original miles. Requiring only an exterior refinish, the car was expertly repainted with the engine and front sub frame removed from the car, and a completely new blood red interior was fitted, with all work performed to the highest possible standards. Now showing only about 17,000 original miles and equipped with chrome wire wheels, new tires, the original AM/FM radio, full spare w/chrome wire wheel, knock off hammer, jack, bottles of touch up paint, tool kit w/greaser, owner’s manual and books, this Fixed-Head Coupe is show-ready and performs exactly as it should, with the crisp overall feel that only an unrestored car can deliver. With fascinating early ownership and not yet shown in competitively judged events, this impeccable Series I E-Type now stands ready for your enjoyment of driving or showing.

Jaguar’s E-Type enjoyed a very successful production run, beginning with its introduction at Geneva in 1961 and ending in mid-1974. An instant legend in its initial form, the later Series I cars are particularly desirable with their enlarged 4.2-liter engine, fully-synchronized four-speed gearbox and adjustable bucket seats, combined with the early-style covered headlights and toggle-type switchgear. The car retained its pure form for 1965 with no external changes, but it was now more comfortable and responsive than ever before. Not long afterwards, the onslaught of safety and emission regulations altered both the appearance and performance; accordingly, the Series I cars, built from 1961 to 1966, are the most highly prized by collectors and Jaguar enthusiasts today. This Series I Fixed Head Coupe from 1965 has a fascinating history, having originally been owned by Bob Leppan, the co-owner of Detroit Triumph during the 1960s. Leppan, who remains famous today as the driver of the Alex Tremulus-designed “Gyronaut X1” Bonneville streamliner, set the US motorcycle speed record at an amazing 245.667 mph in 1966. In 1970, Leppan also joined the “200 mph Crash Club” when he lost control of the Gyronaut at over 270 mph due to front-suspension failure.