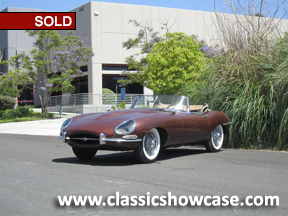 (SOLD) The car is a wonderfully documented, 28,000 mile example which resided in one family's stewardship for 45 years. Purchased on December 24, 1963 by Dr. Henry N. Hillard as a Christmas gift for his wife, Ethel, the roadster remained with the Hillards for the rest of their lives. Jaguar Heritage documentation confirms Dr. Hillard as the original owner as well as verifying that the car retains all its original integrity, including numbers matching engine, as well as chassis, gearbox and body numbers. The livery was Opalescent Golden Sand with a tan interior and Sand top. Alongside its self evident originality, the car benefits from fabulous and rarely seen early documentation including its original Bill of Sale from Ladd Motors (where Dr Hillard traded in his 1962 Buick Convertible), registration records, Jaguar Manufacturers Warranty Card, Jaguar Periodic Maintenance Vouchers as well as the original tools. Running and driving this early 3.8 Litre 'E' represents a perfect automobile for inclusion in the growing number of preservation class events.

All E-Types featured independent coil spring rear suspension, and with torsion bar front ends, and four wheel disc brakes, in-board at the rear, all were power-assisted. The Series 1 can be recognized by glass-covered headlights (up to 1967), small "mouth" opening at the front, signal lights and tail-lights above bumpers and exhaust tips under the number plate in the rear. The 3.8 liter cars have leather-upholstered bucket seats, and an aluminum-trimmed centre instrument panel. This Jaguar is the early Series I E-type 3.8 Roadster. It has a 4 speed transmission, covered headlights, toggle switches on the dash, and the early-style bucket seats. It was a great candidate for restoration before we restored it.