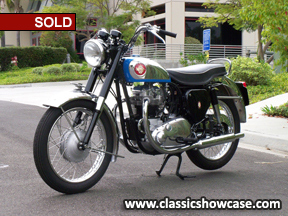 (SOLD) This is a super sharp first year Super Rocket with TT carburetor, a heavy crankshaft and even more upgrades to make this a top performer in its time. It has very rare blue paint along its gas tank. This bike has undergone a comprehensive restoration with no bolt was left unturned and every washer counted. This is a Martin Schalwijk dedicated restoration.

The BSA Super Rocket is a British motorcycle that was a development of the BSA Road Rocket that evolved from the Golden Flash. The A10 had a reputation for reliability but was struggling to compete against the Triumph engines and the Norton Featherbed frames, so the Super Rocket offered more performance and better handling than earlier models. Launched in 1957 the BSA Super Rocket had a new alloy head and an Amal TT 'racing' carburetor. A 'clubman' version, the BSA Rocket Gold Star was produced with rearsets, 'clip-on' handlebars and a tuned engine but this was something of a 'special' and was produced at the same time as the Super Rocket. Over the years the A10 built a reputation as a rugged and reliable bike, ideal for sidecar use (which was popular when cars were too expensive for many people to run). The Super Rocket has a near-three-figure cruising speed and a lusty 650cc twin - fuel consumption also in the three-figure class. Alongside the existing plunger-framed machines were new models equipped with swinging-arm rear suspension, while the A7 Shooting Star and A10 Road Rocket sports twins came with new aluminum-alloy cylinder heads. The latter produced a highly respectable 40bhp, and as tested by Motor Cycling magazine was found capable of reaching 109mph.