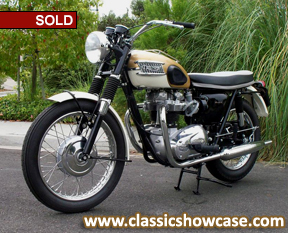 (SOLD) Rare second year unit construction Bonneville. The 1964 Bonneville had many similarities to the 1963 model, but at the same time acted as a testament to the continuing process of refinement and development. Minor changes were made to the frame including the bolting of the foot pegs to the rear engine mounting plates, and the strengthening of the center stand brackets. The 1964 front forks were an all new design having external springs covered in new rubber gators. Upper fork covers with headlight brackets were finished in a glossy black paint as were the lower sliders, except their upper section which was chromed. Aesthetically, the new 1964 paint scheme was gold on top and Alaskan white on the bottom; however, they were designed in a brand new way. As an alternative of simply dividing the colors horizontally and separating them at the back with a pinstripe, the new arrangement had the top color covering much more of the tank, following the line of the kneepads, leaving only a small area of the lower color, Alaskan white in this case, below the tank emblem. The front fender was now steel, painted white with a gold stripe down the center. Fully restored to as new condition. A Jim Hiddleston meticulous restoration. Sold with a Bill of Sale.

The Bonneville T120 was Edward Turner's last production design at Triumph (in retirement Turner designed the Triumph Bandit/BSA Fury which did not pass the prototype stage before BSA went under). The new motorcycle was conceived and developed by Doug Hele and Brian Jones so quickly that it was not included in the 1959 Triumph catalogue. With a 649 cc (39.6 cu in) parallel-twin (two-cylinder) engine the T120 was based on the Triumph Tiger T110 and was fitted with the Tiger's optional twin 1 3/16 in Amal monobloc carburettors as standard, along with that model's high-performance inlet camshaft.[1] Launched in 1959 by Triumph as "The Best Motorcycle in the World", the Bonneville T120 was aimed mainly at the lucrative US market where enthusiasts were demanding extra performance. Initially produced with a pre-unit construction engine which enabled the bike to achieve 115 mph (185 km/h) without further modification, the power tended to induce high speed wobbles from the single downtube frame, so in 1963 a stiffer and more compact unit construction model was introduced, with additional bracing at the steering head and swinging arm. The steering angle was altered and improved forks were fitted a couple of years later, which, together with the increased stiffness enabled overall performance to match that of the Bonneville's rivals.