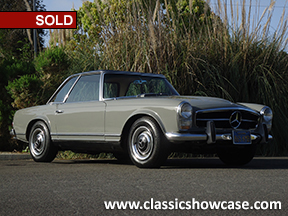 (SOLD) This Mercedes Benz 250SL Roadster is an early Blue plate Southern California car and is offered with both a hard and soft top. This is a two owner car that has been in storage for 20 years and has been well maintained by the previous owner. It is in a very appealing color combination of dark grey with a red interior. Features dealer installed A/C (Kuhl Meister), original rubber trunk mat, very clean interior, original paint. A full service will be done by Classic Showcase, which will include servicing the brakes, bushings and seals.

The 250 SL was introduced at the 1967 Geneva Motor Show. Production had already commenced in December 1966 and ended in January 1968. The short one-year production run makes the 250 SL the rarest of the W 113 series cars. The 250 SL retained the stiffer suspension and sportier feel of the early SLs, but provided improved agility with a new engine and rear disc brakes. Range also improved with increased fuel tank capacity from 65 L (17.2 US gal) to 82 L (21.7 US gal). Like its predecessor, the 250 SL was offered with a 4-speed automatic transmission, and 4-speed or ZF 5-speed manual transmissions. For the first time, an optional limited slip differential was also available. Of the 5,196 250 SLs produced, more than a third were sold in the US. The main change was the use of the 2,496 cc (2.5 L) M129.II engine with 6 mm (0.2 in) increased stroke, 2 mm (0.1 in) increased valve ports, and seven main bearings instead of four. The nominal maximum power remained unchanged at 150 PS (110 kW; 150 hp), but torque improved from 145 lb•ft (197 N•m) to 159 lb•ft (216 N•m). In the US, power output (SAE gross) was listed as 170 hp, same as for the 230 SL. Resiliency also improved with a new cooling water tank ("round top") with increased capacity from 10.8 L (2.9 US gal) to 12.9 L (3.4 US gal), and a standard oil-water heat exchanger. The wider power band of the 250 SL resulted in noticeably improved performance, as the 230 SL engines rarely produced more than 143 PS (105 kW; 141 hp) in practice. The 250 SL also marked the introduction of a 2+2 body style, the so-called "California Coupé", which had only the removable hardtop and no soft-top: a small fold-down rear bench seat replaced the soft-top well between passenger compartment and trunk. The lacking soft-top relegated open California Coupés to a formidable nice weather ride, so many of them are very well preserved today. Retrofitting the soft-top above the rear bench seat requires considerable effort and expense, however. Thus while these 2+2 models are rare, their somewhat limited usability makes them not particularly sought after today