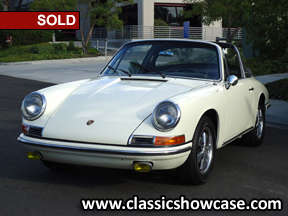 (SOLD) This matching-numbers very collectible 1967 soft window Targa is a 2-owner Southern California car, and a very nice example of an early 911. It was restored some years ago and kept garaged and well maintained. The engine and engine bay are very nice, and the lid is finished with black hinges. Classic Showcase recently performed a cosmetic restoration that included a complete new interior done by their upholstery department in the proper materials, which included the seats, carpets and panels etc…. All the yellow and silver CAD items were replated in their proper finish. All the instruments were removed, cleaned and serviced. The sheet metal on the engine was disassembled, and restored, as well as the hardware was restored in the correct finish, the carbs were restored and rebuilt ad set up to operate properly. A major tune up done recently, as well as the valves adjusted. Features a period correct Blaupunkt AM/FM push button radio with Hirschman antennae, original door mirror, and fog lights. This original Targa is a wonderful Southern California car that is ready to be driven, shown and enjoyed. It is accompanied by a Porsche Certificate of Authenticity documenting its authenticity and original color combination.

The 911 can trace its roots back to sketches drawn by Ferdinand "Butzi" Porsche in 1959. The Porsche 911 classic was developed as a much more powerful, larger, more comfortable replacement for the Porsche 356, the company's first model. The new car made its public debut at the 1963 Frankfurt Motor Show. The car presented at the auto show had a non-operational mockup of the 901 engine, receiving a working one in February 1964. In 1967 the Targa (meaning "plate" in Italian) version was introduced; The Targa had a stainless steel-clad roll bar, as Porsche had, at one point, thought that the U.S. National Highway Traffic Safety Administration (NHTSA) would outlaw fully open convertibles in the US, an important market for the 911. The name "Targa" came from the Targa Florio sports car road race in Sicily, Italy in which Porsche had notable success, with seven victories since 1956, and four more to come until 1973. This last win in the subsequently discontinued event is especially notable as it was scored with a 911 Carrera RS against prototypes entered by Italian factories of Ferrari and Alfa Romeo. The road going Targa was equipped with a removable roof panel and a removable plastic rear window (although a fixed glass version was offered alongside from 1968). 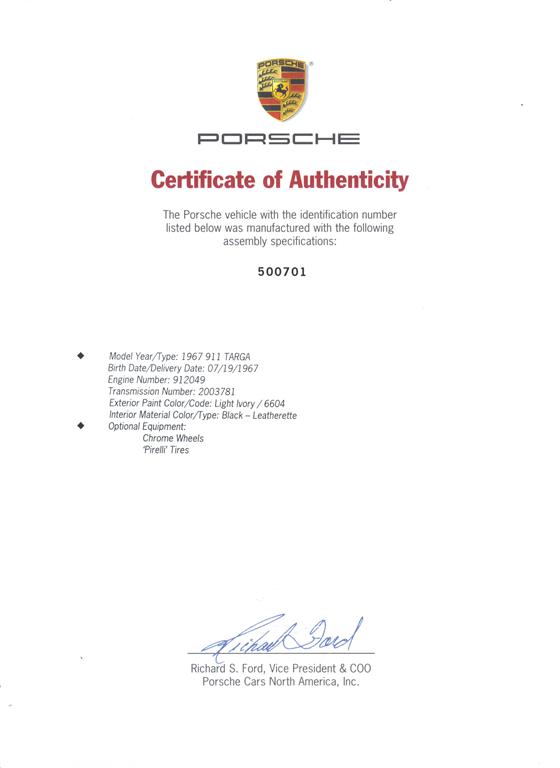