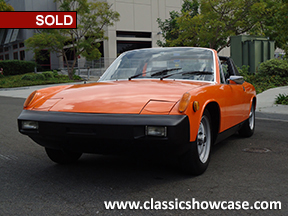 (SOLD) This 1976 Porsche 914 Targa is an exceptional original example. It is very hard to find an original car such as this. This is an unmolested survivor with the patina of originality in a wonderful color combination. It was manufactured December of 1975, and has had limited ownership, been garage kept, well maintained, and has the original complete interior that is in very good condition. It features the original jack, tools, owner’s manual, center console instrument cluster with a factory clock, oil pressure gauge and a volt meter, keys, and the original factory push button Sapphire AM/FM radio with factory speakers. It also features driving lights in the front bumpers. This is a special 914 for the discerning collector and enthusiast.

By the late 1960s, inflation and currency issues had forced Porsche so far up market (above the magic $10,000 mark for a highly optioned 911S) that they became desperate for a new four-cylinder entry-level car. The 912 was ripe for replacement, as it could no longer be produced cheaply enough to qualify as entry-level, and the new Datsun 240Z had made a mockery of it on a performance level. The answer was collaboration with Volkswagen who would sell the new car, dubbed the 914, as a VW-Porsche in Europe. In the U.S. it was known as a Porsche but never carried the Porsche crest on the hood. Styling was considered odd in the day but it avoided most of the impracticalities of the mid-engined layout with good outward vision and two large trunks. Performance was modest at first with base VW-derived engines of 1.7 and 1.8 liters. 2.0 liters cars gave sparkling performance and are the most desirable of the four-cylinder models today, and they are affordable to rebuild to boot. Handling is superb with fine brakes and phenomenal steering. Bright period colors suit the car well. The new Bosch L-Jetronic fuel injection system was added to American units to help with emissions control. In 1975 and 1976, the chrome or painted bumpers were replaced with heavy, rubber-covered units.