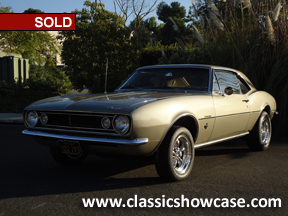 (SOLD) This is a limited owner Southern CA black plate Camaro that has always been well maintained. It features a new heavy duty Griffin radiator with thermostat controlled electric fan, a rebuilt differential ring and pinion gears (3.73), all new bearings, new posi-traction unit, new axle bearing rear brakes, drum brakes in the rear with disc in the front, a vacuum brake reservoir tank and master cylinder that have been chromed and polished, a new heater core; and all new hoses, pipes, and fuel lines. The car is dressed with New Torq Thrust 2 wheels and BF Goodrich tires. There is less than 4,000 miles on all the mechanics. It also has all original deluxe factory upholstery package including the headliner, seats and door panels. This beauty has been a multiple trophy winner, mostly Best of Show.

The Chevrolet Camaro is an automobile manufactured by General Motors under the Chevrolet brand, classified as a pony car and some versions also as a muscle car. The Camaro was first shown at a press preview in Detroit, Michigan, on September 12, 1966, and then later in Los Angeles, California, on September 19, 1966. The Camaro officially went on sale in dealerships on September 29, 1966, for the 1967 model year. First-generation Camaro debuted in September 1966, for the 1967 model year, up to 1969 on a new rear-wheel drive GM F-body platform and would be available as a 2-door, 2+2 seating, or a coupé. The Camaro was touted for having a conventional rear-drive, front-engine configuration. In addition, the Camaro was designed to fit a variety of power plants in the engine bay.