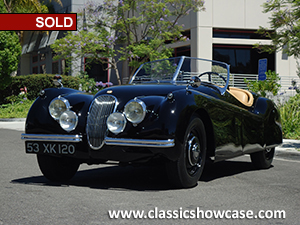 (SOLD) This matching numbers Southern California black plate XK-120 had the same owner for 23 years, and was a one owner car when the last owner purchased it. The roadster was originally purchased from Hornburg Jaguar in Los Angeles, CA, and had always been garaged and well cared for. It is the original body and frame as from factory, straight and solid with no rust. The car was gently restored with care in 2003, and most recently received a freshening up and full servicing by Jaguar professionals at Classic Showcase, who serviced all systems and changed all fluids in the vehicle. In addition, master upholsterers at Classic Showcase have recently installed a completely renewed, beautiful handmade leather interior and restored the top bows and trimmed, fitted, and installed a new cloth convertible top. During the roadster's initial restoration, the engine was overhauled, hydraulic system renewed, and the roadster's body was stripped, repainted, wet sanded and buffed to a fabulous finish. The 120 also received new leather gaiters added to the rear springs, new gas tank, new wiring harness, heavy duty starter, stainless steel exhaust system, and porcelain manifolds. It features Lucas tri-bar head lights and driving lights, and comes with the original jack and tire tool mounted near the spare tire. The car sits on its original steel wheels with hubcaps and spats, giving the purest expression of the XK-120's sleek lines. It is the 2,754th of 6,437 left hand XK-120 roadsters produced from July 1949 to September 1954. A Jaguar Daimler Heritage Trust Certificate accompanies the vehicle. In sum, this vintage XK-120 is in excellent running and driving condition, and a highly sought after model that is ready to be driven, shown and enjoyed by collectors and enthusiasts alike!

The XK120 was launched in roadster form at the 1948 London Motor Show as a test bed and show car for the new Jaguar XK engine. It caused a sensation, which persuaded Jaguar founder and design boss William Lyons to put it into production. In 1949 the first customer car, chassis number 670003, was delivered to Clark Gable. The "120" in its name referred to its 120 mph (193 km/h) top speed (faster with the windscreen removed), which made the XK120 the world's fastest standard production car at the time of its launch. It was available in two open versions, first as the roadster (designated OTS, for open two-seater, in America), then also as a Drophead coupé (DHC) from 1953; and also as a closed, or "fixed-head" coupé (FHC) from 1951. In 1950 and 1951, at a banked oval track in France, XK120 roadsters averaged over 100 mph for 24 hours and over 130 mph for an hour, and in 1952 a fixed-head coupé took numerous world records for speed and distance when it averaged 100 mph for a week. Roadsters were also successful in racing and rallying. 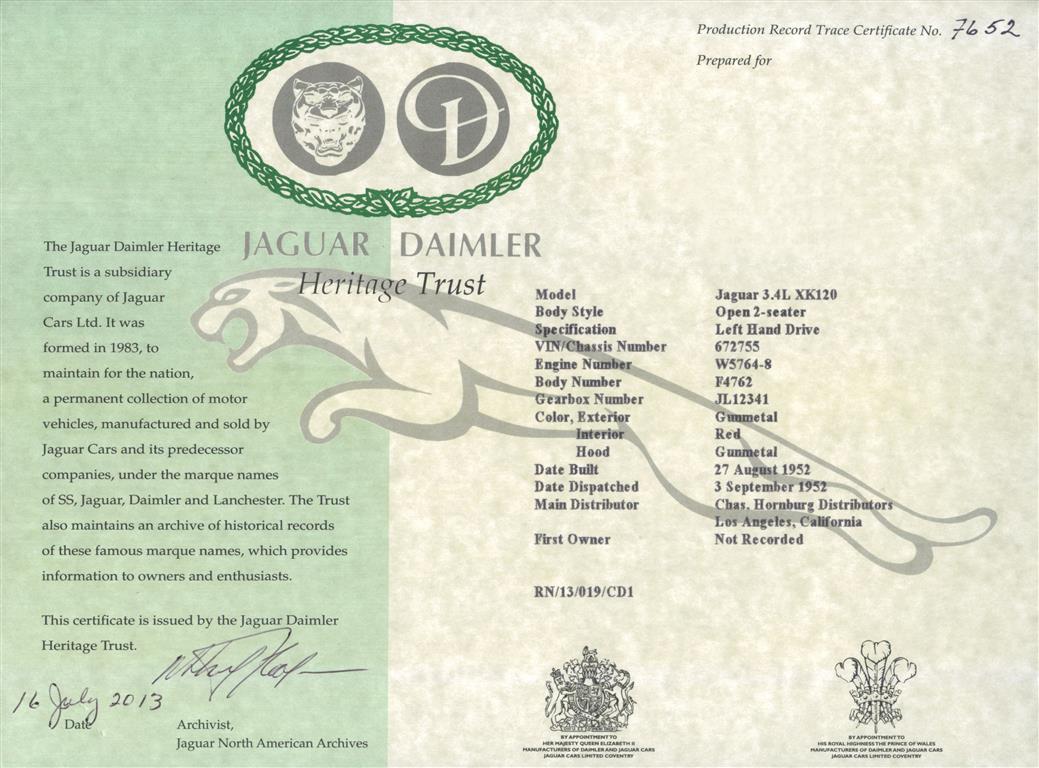