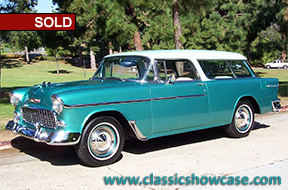 (SOLD) This spectacular Chevy Nomad was a C.O.P.O. order, and the only factory-produced model of 1955 in the #599 color combination of Sea-Mist Green over Neptune Green (this color combination was not available on standard 1955 models!). The Nomad underwent a complete frame on restoration in 2010, with everything needed to return it to original specifications including: paint, interior, brakes, etc. was performed. During the restoration process a 350 engine, transmission, and power steering were upgraded for improved performance and a better driving experience. This Nomad is a very rare and collectible example, and is sure please collectors and enthusiasts alike!

The Chevrolet Nomad was a station wagon model made off and on from 1955 to 1972. The Nomad is best remembered in its two-door 1955–57 form, and was considered a halo model during its three-year production as a two-door station wagon. The two-door Nomad differed from other station wagons of the era by having unique styling more reminiscent of a hardtop sedan than that of a standard station wagon. The Nomad's unique design had its roots in a General Motors Motorama show car of the same name that was based on the Corvette. The Concept was introduced at the GM Motorama in 1954 as one of Head Stylist Harley Earl's "dream cars". GM approved production of the vehicle if the design could be transferred to its standard model, because top GM brass felt that they could sell more models if it were attached to the popular Bel Air model. 1955 Chevrolets received all-new styling. Advertised as "The Hot One," the boxy new Chevy was crisp, clean, and thoroughly modern-looking. Nomads, like Bel Airs, came loaded with interior carpet, chrome spears on front fenders, chrome window moldings, and full wheel covers.