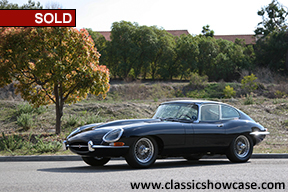 (SOLD) Classic Showcase restored this beautiful XKE to a high standard several years ago, where it was finished in the elegant color combination of Jaguar Dark Blue, with a beige interior. The coupe is a matching-numbers example that has benefited from a comprehensive and thoroughly documented mechanical rebuild and body restoration to factory original specifications. The comprehensive restoration included: taking the car apart, photographing, performing a complete vehicle repaint inside and out which consisted of stripping the paint, performing the body work, metal finished, fitted the chrome rubber and panels, and then prepared the car for primer, sealer, base coat, clear coat and wet sanded and buffed. All body parts and panels were painted separately off the car. All systems were gone through, replaced and updated as needed, including the electrical, fuel, cooling, and the hydraulic systems. The instruments were restored; replated all brite work, and added a new exhaust system and battery. Our upholstery department professionals’ custom tailored and fitted a complete new interior including headliner, in all the proper leather, vinyl, moquette, hardura, and carpet materials. Carefully maintained ever since, this XKE has had only 3,000 miles since being restored, and would make a superb driver or show car!

Jaguar made a habit of shocking the automotive world. Sometimes the impact of its cars reached beyond the showrooms and exposition halls and rocked popular culture. Not even founder William Lyons could have predicted the impact of the Jaguar XKE. When first seen at the 1961 Geneva Salon, the new Jaguar was long and low and as sexy as a car could be. Jaguar also claimed an incredible 150mph top speed thanks to a 265 horsepower version of the glorious 3.8-liter twin cam engine. From the outset, the new E-Type was offered in OTS (open two seat) or FHC (fixed head coupe) form. In the swinging Sixties, noted American motoring writer Henry Manney III dubbed it "The greatest crumpet-catcher known to man." The E-Type featured four-wheel independent-suspension, disc brakes all around and a four-speed manual gearbox to send power aft. Whether open or closed, it offered Ferrari performance for less than half the price. For 1965 an enlarged 4.2-liter engine was introduced and mated to a new all-synchromesh transmission. Externally unchanged, the interior was updated with more supportive bucket seats. Although the power rating remained at 265bhp, torque was increased. To most sports car enthusiasts, few cars are more appealing than a Jaguar E-Type. Those in the know prefer the later cars - like the one on offer - with the bigger engine and the better seats, but not so late that they lost the triple SU carburetors, headlamp covers or the purposeful dashboard toggle switches.