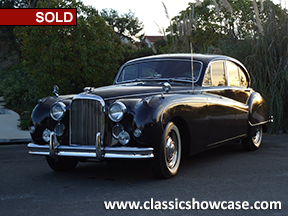 (SOLD) Here is an incredible opportunity to own a Mark VIII Sedan with only 13,491 actual documented miles. This car is loaded with patina and has been kept in excellent condition with its limited ownership. It is in its original color combination of black with red interior, with supple leather and beautiful wood. It has tremendous appointments such as push button radio, wide white wall tires, a speed hold switch, a rear clock in the back seat, pull down picnic tables, magazine rack fitted to the back of the bench seat, cigarette lighters front and rear, walnut trim, and is a left hand drive vehicle. It still remains equipped with tool boxes in the driver and passenger doors, and the jack and spare tire are stowed in the boot. It is hard to find a car of this vintage, in this condition, with its original keys, incredible documentation in books, records all supporting its history. This fabulous sedan has been well maintained and cared for.

The 1956-1959 Jaguar Mark VIII was a slightly heavier replacement for the Mark VII/VIIM sedans. The car shared its 10-foot wheelbase with its predecessor, the Jaguar Mark VII, which outwardly it closely resembled. However, the interior fittings were more luxurious than those of the Mark VII. Distinguishing visually between the models is facilitated by changes to the front grille, the driving or fog lamps being moved from the front panel to the horizontal panel between bumper & front panel, larger rear lamps and most obviously a curved chrome trim strip below the waistline which allowed the factory to offer a variety of two-tone paint schemes. In addition the new car had rear spats that were cut back to display more of the rear wheels and featured a one-piece slightly curved windscreen. The Mark VIII inherited from its predecessor the 3442 cc straight-six engine which it shared with the Jaguar XK140 that appeared two years earlier. In the Mark VIII, a modified cylinder head known as the 'B' type was used. Although introduced subsequent to the 'C' type competition head (as used on the C-Type racer and available as an option on the XK 140) this naming made more sense than might at first appear. The 'B' type head used the larger valves of the 'C' type head, with the smaller intake port diameter of original XK cylinder head that had been introduced on the MK VII, which was now referred to as the 'A' type. The modified head supported by twin SU carburetors, and employing a manual four-speed transmission, advertised engine output was now increased to 210 bhp (141.7 kW): the claimed top speed in excess of 106 mph (170 km/h) was considered impressive, given the car's bulk. Transmission options included overdrive or a Borg Warner three-speed automatic box.