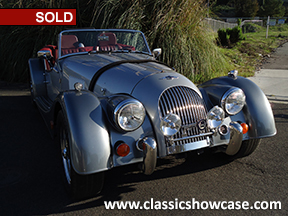 (SOLD) Coming in a beautiful two-tone Silver/Dark Grey colored exterior, this stunning Morgan Plus 8 35th Anniversary Edition is one of 100 35th anniversary Morgan editions built! This stunning roadster comes complete with many upgrades such as, leather bucket seats, bad weather windows with top and fitted boot, a “Matthias Kauffelt” wood dash with the Rally Gauge package, a Premier CD player, triple washers, restyled front and rear for more of a European look, driver and passenger mirrors, driving lights and fog lamps, badge bar with badges, a full size spare, alloy radiator, and a Moto-Lita three spoke steering wheel with tilt column. Also included are the factory build pictures nicely bound in a leather cover, with the owner’s manual. This beauty has participated in several events and has won Best in Class at the MOG West 24 Concourse, the Western National Morgan Meet at Cambria in 2006, and the Morgan’s at Mallory Park. This Morgan presents a fantastic opportunity for the collector or enthusiast that is ready to drive and enjoy a piece of history!

The Morgan Plus 8 is a sports car built by British car makers Morgan between 1968 and 2004 with a total of 3506 examples being produced. Its instant and enduring popularity has been credited with saving the company and keeping the company famous during the 36 years of its manufacture. Among Morgan enthusiasts, it is deeply associated with Peter Morgan, the owner-chairman behind its design. The development of the Plus 8 was led by Maurice Owen, a race car engineer taken on specifically for the role. The Plus 8 prototype was based on a modified version the chassis of the Plus 4, to which it added the Rover alloy block 215 cu in (3.5 l) V8, purchased from GM-Buick in 1967. Plus 4's Moss gearbox was carried over and the Salisbury 7HA axle was uprated with a limited slip differential. The chassis was developed in stages to accommodate gearbox changes in 1973 and 1976, the body widened in 1976 to accommodate the widened chassis and the wings widened to accommodate larger tires to handle the increasing power and trend for lower profile and wider tires. The original 1968 Plus 8 was 57 inches (1,400 mm) wide and the last was 64 inches (1,600 mm) (with an optional "wide body" at 67 inches (1,700 mm)) For several years in the 1960s the Plus Eight was the fastest-accelerating UK production car. To mark the 35th year of production of its Plus 8, MMC released a commemorative 'Anniversary Edition'. From 2000 on, all Morgan Plus 8s were fueled by the GEMS system used on the Land Rover Discovery II. An eight-cylinder engine was used though horsepower varied.