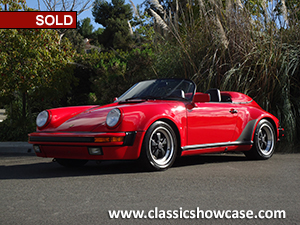 (SOLD) This single-owner 911 Speedster was one of only 823 Speedsters to come stateside, all of which came with the widened stance of the Turbo. Coming in a classic color combination of Guards Red over Black leather, this Speedster shows only 32,342 miles since new. The Speedster also sports a number of options, including a raised hub steering wheel, limited slip differential, short shift transmission, and a Blaupunkt stereo. As well, the 911 came equipped with a set of rare, lightweight, manual adjustment "Speedster Seats". Since leaving Stuttgart, the car has been meticulously maintained by Porsche specialists Steinel's Autowerks in Twinsburg, Ohio. Both the 15,000 mile and 30,000 mile services (which included critical valve adjustments) were performed well before they were due. Most recently a new set of Toyo Poxes T1R tires were added to the Speedster's original wheels. Accompanied by a full service history, original window sticker, and the jack, as well as all of the original tools and manuals; the only modification to the car is the removal of the central third taillight (the piece removed is included with the car, should the new owner wish to reinstall it). These Speedsters have become modern collectibles thanks to their low production numbers, sinister good looks, superb handling, fantastic brakes and most importantly their unique roadster feel. Furthermore, as the last of the 3.2-liter 911s, Speedsters are considered to be some of the best sorted, and most enjoyable of the air-cooled 911s as well as the best investments.

A 'modern classic' if ever there was one, Porsche's long-running 911 arrived in 1964, replacing the 356. The latter's rear-engined layout was retained but the 911 switched to unitary construction for the body shell and dropped the 356's VW-based suspension in favor of a more modern McPherson strut and trailing arm arrangement. Porsche's first take on a convertible 911 had been the Targa model of 1965, a 'halfway house' design chosen because of fears that a genuine soft-top would not meet US Federal safety regulations, but by 1981 the company felt able to proceed with the genuine article. Introduced in normally aspirated 3.0-liter form in 1982, the 911 Cabriolet lost little, if any, rigidity with the deletion of the Targa roll-over bar. The 911 Cabriolet proved a hit from the moment of its debut at the Geneva Salon in March 1982 and by the end of the 1983 model year had sold over 4,000 units, a total some 50% higher than that achieved by the cheaper Targa version. Completing the soft-top 911 line-up was the Speedster, which revived a charismatic model from Porsche's past when it arrived in 1989, the name previously having been applied to that most stylish of the many Type 356 variants. Based on the 911 Turbo Cabriolet, though normally aspirated, the 3.2-liter Speedster was launched immediately prior to the introduction of the new Type 964 body shell, and thus was the last 911 model to feature the 'classic' body style. The latter was reworked by chief stylist Tony Lapine incorporating numerous references to the original 356 Speedster, from the racy, low windscreen to the pair of cowlings behind the seats that concealed the stowed-away hood. One of the rarest of the 911 family, the 911 Speedster was built during 1989 only, a mere 2,102 cars being completed for the worldwide market.