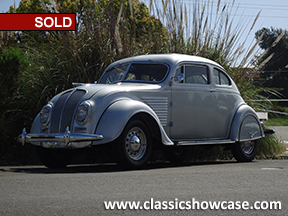 (SOLD) Though truly a unique car for the time, the Airflow wasn’t widely accepted by the buying public. Coupled with the height of the Depression, only 1,520 DeSoto coupes were built in 1934. Of them, reportedly only 15 are known to have survived. This example is one of the few to have been restored. Finished in 2010, this stylish Airflow was brought back to original specification, including completely rebuilding the engine. It was finished in silver with a correct brown cloth interior and is show ready. The beautiful Art Deco appointments include the radio with rooftop antenna, chrome interior trim and correct upholstery designs and seat details. The stylish “waterfall” grille accents this unique but short-lived modern marvel. Previously owned by Charles Cochran, a former president of the Airflow Club of America, this forward thinking Desoto is an exceptional example of both form and function.

In 1934 the entire DeSoto lineup featured Chrysler Corporation’s new streamlined Airflow design. Walter P. Chrysler expected the streamlined and futuristic Airflow models to take the nation by storm and to reap huge profits. A design far ahead of its time, the Airflow featured built-in headlamps and wider front seats that could accommodate three adults abreast. The hood was extended past the front axle, and the rear fenders had full fender skirts. There was also a rounded radiator grille and a modified vee-shaped windshield, further styling features that set this car apart from anything ever seen on North American shores. Not just an exercise in styling, the Airflow series was also a mechanical marvel, incorporating many new concepts in an effort to improve the driving experience. For improved handling, neutral weight distribution was attempted, and the body was lower to the ground thanks to a unit body construction and extra-long leaf springs. One of the major pay-offs of the Airflow design was greatly increased fuel consumption over traditionally styled vehicles of the era. Harry Hartz managed a cross-continental road trip from New York City to San Francisco, California with a total fuel bill of just $33.06, averaging better than 22 miles per gallon.