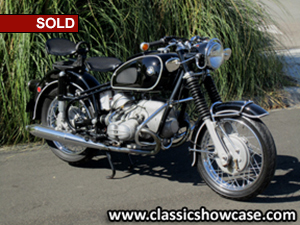 (SOLD) This BMW R69S is a matching numbers motorcycle in very good condition, and recently has been fully serviced by Classic Showcase. The motorcycle features Denfeld Seats for rider and passenger, with front and rear foot pegs, Telescopic forks, a double loop steel tubular frame, front & rear drum brakes, original turn signals built-in to the ends of the handle bar grips, twin Bing carburetors, and a dual exhaust system. This a very sporty bike that is great for long distance trips or short adventures, and a highly collectible BMW motorcycle that is hard to find!