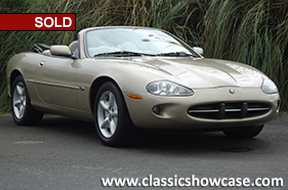 (SOLD) This crisp XK8 is a one family owned car since new, and is in great original condition. With a popular color combination of a topaz exterior with a bone interior and a beautiful burl walnut dash, this XK8 convertible is ready for the road!

The Jaguar XK8 is a grand tourer car that was launched by Jaguar Cars in 1996, and was the first generation of a new XK series. The XK8 was available in coupé or convertible body styles and with the new 4.0-litre Jaguar AJ-V8 engine. In 1998 the XKR was introduced with a supercharged version of the engine. The first-generation XK series shares its platform with the Aston Martin DB7. Both cars are derived from the Jaguar XJS, though the platform has been extensively changed. One of the revisions is the use of the second generation of Jaguar's IRS unit, taken from the XJ40. Development began in 1992, with design work starting earlier in late 1991. By October 1992 a design was chosen and later frozen for production in 1993. Prototypes were built from December 1993 after the X100 was given formal approval and design patents were filed in June 1994. Development concluded in 1996.