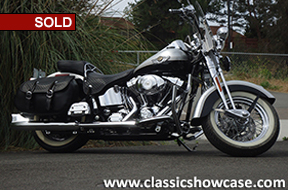 (SOLD) Harley-Davidson pulled out all the stops on the Springer Heritage 100th Anniversary model; With a mere 8,000 miles ridden since new, this bike performs and rides like a brand new motorcycle. Every part on this bike is unique, beginning with the sleek chromed Springer front end and a stretched gas tank with a classic full length sculpted chrome console. Completing the cool period look, the dragster-inspired rear fender is an original design, complete with reflector-optic bullet turn signals that match the chrome bullet headlight perfectly. The design maintains a distinctly retro look, including features such as: a 100th Anniversary tank emblem and embossed Anniversary seat, factory leather saddle bags, windshield, along with some very nice details like braided lines and an abundance of shiny chrome throughout. The running gear is thoroughly modern, with a 17-inch rear spoked wheel and 160mm wide radial tire. The Twin Cam 88B engine powers the 66.5 horsepower engine down the road with a modern belt drive system in one fluid motion through dual shotgun exhaust pipes. The rigid mount, 1450 cc Twin Cam V-Twin is powder coated in black, and fully balanced with a full complement of 100th Anniversary chrome covers in place. For the rider, the bike provides a very comfortable set up, with a low 25.9 inch seat height and chrome pull-back low-rise handlebars, just right for those long rides to your favorite destination! Blending modern amenities with classic Harley stylings of yesteryear, this highly collectible bike offers the discerning motorcycle collector an excellent opportunity to own of a piece of American motorcycle history.

From a 10’x15’ shed in the Davidson backyard, to the most recognized motorcycle brand in the world, Harley-Davidson has always stayed at the cutting edge; no other model-year in the history of Harley-Davidson had ever been more anticipated than 2003. Harley-Davidson Motor Company turned 100 years old, and for HOG members, enthusiasts, and everyone involved with the brand, it was a very special year. Every bike produced for the 2003 model year reflects this significant Anniversary, and all are considered collector’s items, but none have more presence as a limited edition work of motorcycle art than the Springer Heritage, featuring limited edition signature paint schemes and centenary motifs that give more than a passing nod to the great Harley’s of the past.