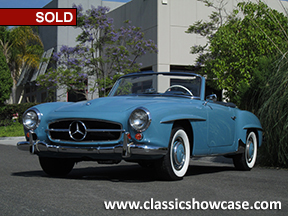 (SOLD) Beautifully presented in light blue with wide, white-wall radial tires, matching wheel covers and with a navy blue interior and convertible top, this 190SL Roadster stands as a nicely restored example. Benefitting from a recent restoration and detailing by Mercedes-Benz professionals, the roadster was disassembled and body worked, prepared for primer, sealer, paint, base coat, clear coat, color sanded and buffed to a fabulous finish. Under the hood, the roadster's engine, components, and systems were rebuilt, restored, and serviced, along with the addition of a new exhaust system, re-plating of britework, and had new rubber installed throughout. In addition, the engine bay is exceptionally clean, with it being highly detailed with proper accessories, components, with a well-presented undercarriage. The interior is finished in plush navy blue leather, along with fresh grey carpeting. Desirable features include full factory instrumentation, Blaupunkt AM/FM radio, original speaker box, and a VDO clock mounted on the glove box door, as well as front and rear over riders. The 190SL also comes with numerous, desirable original items such as the owner’s manual, tool roll, jack, and spare tire. With a timeless, classic design and exceptional Mercedes-Benz mechanics, this vintage 190SL stands ready to be driven, shown, and enjoyed by serious collectors and enthusiasts alike.

Conceived by Max Hoffman, the renowned U.S. Mercedes-Benz importer, and aimed squarely at the crucial American export market, the 190SL debuted at the 1954 New York Auto Show alongside the 300SL “Gullwing” Coupe. A more affordable, yet similarly styled open companion model for its complex and costly stable-mate, the 190SL featured advanced monocoque construction and conventional front-opening doors and normal-width sills, providing occupants with ease of entry and exit. The “SL” or “Sport Leicht” designation translates into “Sports Light” and denotes the model’s lightweight aluminum hood, doors, and rear deck lid. Fritz Nallinger led mechanical development of the 190SL. Utilizing relatively humble but proven sedan-based mechanical components; the 190SL was in fact a highly competent road car, yet less demanding than the 300SL. Walter Hacker and his design team executed the handsome open bodywork for the 190SL under Mercedes-Benz designer Chief Karl Wilfert. Design cues shared with the 300SL included stylish “eyebrows” atop the front and rear fenders and massive upright front and rear bumper guards, plus the trapezoidal grille of the 300SL. The 190SL was an unqualified hit from introduction. Confirming Max Hoffman’s keen sense of American car buyers and their specific tastes, the 190SL went on to outsell the 300SL by an eye-opening factor of eight to one. In all, nearly 26,000 examples of the 190SL were produced during the model’s run spanning 1955 to 1963. In testimony to the car’s excellent original design, only a few detail changes were made during the 190SL production cycle. Satisfying to drive and quite refined even by today’s jaded standards, the 190SL is also highly usable in modern traffic conditions, while providing excellent fuel economy. Survival rates are quite good, thanks to their maker’s renowned quality standards, rendering the 190SL an outstanding classic car purchase today.