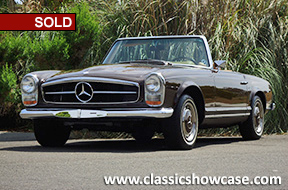 (SOLD) This truly original 1969 Mercedes-Benz 280SL Roadster is a very desirable and sought-after Pagoda model that has been exceptionally maintained; Recently refinished in its original color combination of Tobacco Brown with a Cognac colored interior & matching carpet, this classic 280SL also includes a matching hardtop, nicely complemented with a crisp new matching convertible top. On the inside, the roadster's wood trim has been handsomely restored to a beautiful finish, and includes features such as a Becker Europa AM/FM radio, original factory air conditioning, and a spacious luggage compartment. Other original items included with the 280SL include: the original owner’s manual, spare tire, and toolkit. Mechanically, the 280SL has received a recent tune-up and full servicing by Mercedes-Benz specialists, with all major systems and components being inspected and gone through, and shown to be in proper working order. This highly sought-after 280SL is ready to deliver an exceptional all-weather driving experience in the fine Grand Touring tradition that Mercedes-Benz offers.

The original SL roadster series – the 230SL, 250SL and 280SL – rode on Mercedes-Benz’ W113 monocoque chassis and wore a detachable hard top with a unique design that resembled a Japanese pagoda, earning the series its “pagoda top” epithet. A 2.8L straight-six delivered a healthy 170hp for the flagship 280SL, which became the sole representative of the pagoda series shortly following its December 1967 introduction. Most 280s in the U.S. were automatics, with a few four-speed manuals, but the elusive ZF5 five-speed is very rare and highly valuable today. For 1972, a 4.5L V-8 replaced the 2.8L six-cylinder in U.S. 280s, which now rode on a longer, heavier R107 chassis along with a fresh body style and new name: 350SL (450SL after 1973). The six-cylinder 280SL lived on, but only in Europe, with just a few making their way back to the U.S. Although not known for the agile handling or high performance that Americans had come to know from sports cars such as the Corvette, SLs were considered one of the most comfortable and “civilized” sports cars on the market.