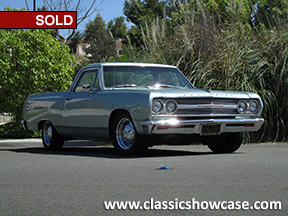 (SOLD) This Classic 1965 El Camino is a beautiful example and a great driver. It has a mostly stock appearance with a few extra touches for driving enhancement, such as the upgraded disc brakes with brake booster, flow master dual exhaust, and upgraded and restored leather bench seat in the original pattern. This beauty comes with the original AM radio in the dash with a Sony FM & CD player mounted under the dash, CA black plates that are currently registered, A/C that blows cold, full factory instrumentation, and power steering and brakes. In the rear bed there is a functional heavy duty rubber mat that covers the cargo area to prevent paint scratches and chipping. Overall, this is a very nice original example that is ready to drive and enjoy. It is also very collectible and sought after.

On October 16, 1958, Chevrolet begins to sell a car-truck hybrid that it calls the El Camino. Inspired by the Ford Ranchero, which had already been on the market for two years, the El Camino was a combination sedan-pickup truck built on the Impala body, with the same "cat's eye" taillights and dramatic rear fins. It was, ads trilled, "the most beautiful thing that ever shouldered a load!" "It rides and handles like a convertible," Chevy said, "yet hauls and hustles like the workingest thing on wheels." The El Camino, translated from Spanish as "The Road," was introduced in 1959 and styled after the Impala car, including the rear "batwing" fins. It was wider, curvier and considerably larger than the Ranchero. The design was too flamboyant for the public and the vehicle was discontinued in 1960. The El Camino was reintroduced in 1964 based on the Chevelle. The more powerful SS engine made the El Camino into one of the iconic muscle cars of the late 1960s and 1970s. The El Camino got a true boost of performance with the addition of two powerful 327 engine options. El Camino, fondly dubbed "Elco" by its owners, finally hit the jackpot in 1965 with understated styling and a wider range of options. It received a facelift with a V-shaped nose matching its redesigned Chevy siblings that year, and was available with the 327-ci Turbo-Fire V-8 that generated 300 horsepower.